The aim of clinical research, an important point in the medical practice, is to develop effective and perspective methodologies for our patients. 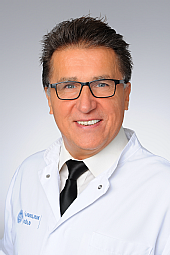 Cryopreservation (freezing and thawing) of whole ovary with blood vessels

Cancer is one of the major death causes in the world.  The overall incidence rate for cancer in children aged 14 years and younger increased by 0.6% per year. The current estimate for Germany relates to a total of approximately 204,000 cancer cases in women, and every year in Germany, around 800 girls under age 15 are diagnosed with cancer.  Due to the increasing effectiveness of cancer treatments and positive long-term prognosis for young women, the problem of post-cancer infertility plays a significant role because chemotherapy can be gonadotoxic and lead to the functional death of ovaries. Cryopreservation of ovarian tissue before cancer therapy with re-implantation after convalescence is the potential key solution to this problem. Now pregnancies and baby-born after retransplantation of frozen ovarian tissue is a routine.

In Germany in 2011 a first baby after re-transplantation of frozen ovarian tissue was born. The method, using of which we have frozen in 2005 ovarian tissue that later resulted to first in Germany baby-born, was developed in our clinic since 2000.

Our perspective experiments are focused on the development of methods of freezing and thawing of intact ovary with blood vessels.

At present in our cryobank of ovarian tissue we have a new object, intact ovaries with blood vessels. In the future these ovaries will be thawed and re-transplanted to patient.

Cryopreservation of spermatozoa is required for storage of fertility before chemotherapy or radiation therapy because these treatments can damage the testicular tissue and lead to infertility.

Technology of vitrification (cryopreservation by direct plunging into liquid nitrogen) of human spermatozoa, in which no cryoprotectants must be used, was developed for the first time in 2002 by our team.

For cryopreservation of spermatozoa of all mammalian species including humans, the following scheme is used: Cells (spermatozoa) + permeable cryoprotectants (for example, glycerol) + cold (for example, liquid nitrogen with -196 °C) = frozen spermatozoa.

However permeable cryoprotectants have the following two peculiarities:

In contrast, the vitrification without cryoprotectants has the following two peculiarities:

The technology provides much better results than the traditional freezing with permeable cryoprotectants. The effectiveness and reliability of our technology has been proven in births after insemination and intracytoplasmic spermatozoa injection (ICSI).

Part of the ovarian tissue obtained before oncological treatment is used for routine histological observation, a mandatory procedure for monitoring and minimizing the risks associated with any future implantation of tissues that could be affected by metastases. After cryopreservation and storage, some ovarian tissue can be thawed and cultured in vitro in order both to screen for the presence of metastases and to monitor follicles. The quality of follicles in the cultured tissue will indicate whether it is possible to restore a woman’s reproductive function.

At present, there are three ways to determine effectively the quality of the cryopreservation procedure using ovarian tissue from a given patient before the reimplantation treatment: (i) evaluation of follicles after post-thawing xenotransplantation to SCID mouse, (ii) in-vitro culture in a large volume of culture medium under constant agitation and (iii) culture on embryonic chorio-allantoic membrane within a hen’s egg. The CAM system is an intermediate stage between in-vitro culture and animal experiments, and it could be considered as an interface between in-vitro and in-vivo models (including xenotransplantation). Importantly, it does not raise ethical or legal questions, nor does it violate animal protection laws.

The chorioallantoic membrane system, which was introduced to practice of our clinic, is a simple inexpensive method. The extraembryonic vessel system of the chick chorioallantois membrane is naturally immunodeficient, similar to the mammalian placenta which is also not innervated.

In vitro cultivation of human oocytes and embryos with micro-vibration

This project was first formulated as the following simple question: What are the conditions for cultivation of oocytes and embryos in laboratory (in vitro) that are missing in comparison with conditions in human body (in vivo)? The answer can be formulated in the following way: routine in vitro culture is static and far from natural because a natural in vivo culture is constant vibration. All fertilization steps in nature (receiving the ovulated oocytes, providing a suitable environment for fertilization) and embryo development with subsequent transport to the uterus take place inside the Fallopian tube. The major cell types of this epithelium are secretory and ciliated cells, whose cilia have a vibrating, or beating, action towards the uterus. ‘Ciliary’ refers to the cilia, which is Latin for vibrating hairs. Baseline cilia beating frequencies have been reported to vary widely between individuals in the range of 5–20 Hz. At the higher frequencies, mechanical contact between oocyte/embryo increases significantly. Pulsative mechanical microvibration stimulates intracellular signals and activates their proliferation and secretory properties. A positive effect of microvibration on development of embryos at in-vitro culture is not new.

We have developed a device which mimics the vibration in the fallopian tube in the best possible way, tested and obtained the permission for usage in medical practice. After the usage of this device for in-vitro culture of embryos in three clinics of Ulm and Cologne (Germany) the following results were obtained.

Cryopreservation (freezing and thawing) of whole ovary with blood vessels

In vitro culture of human oocytes and embryos with micro-vibration